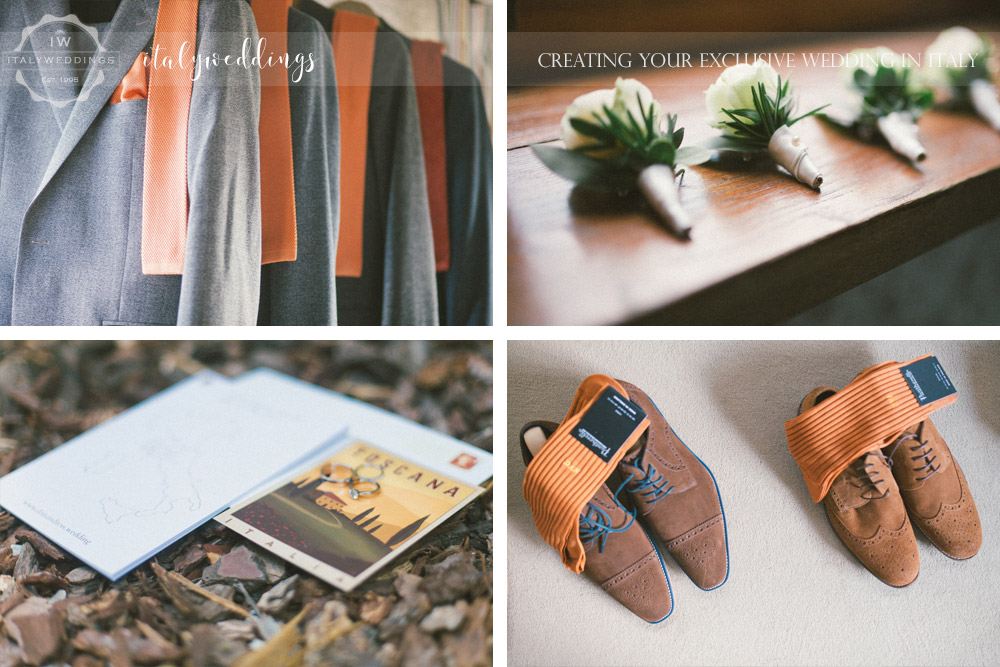 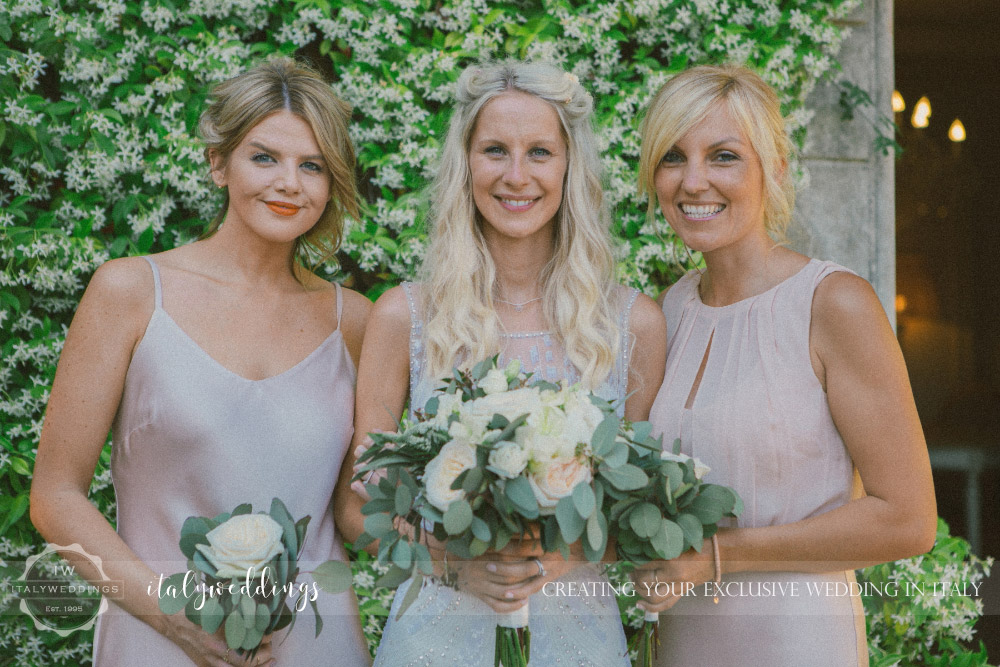 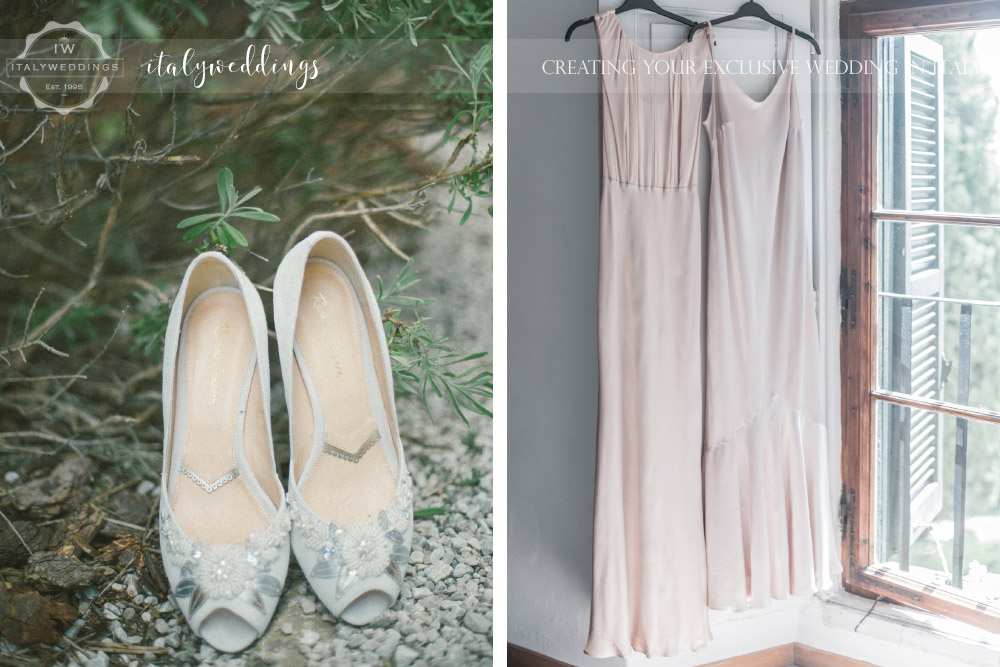 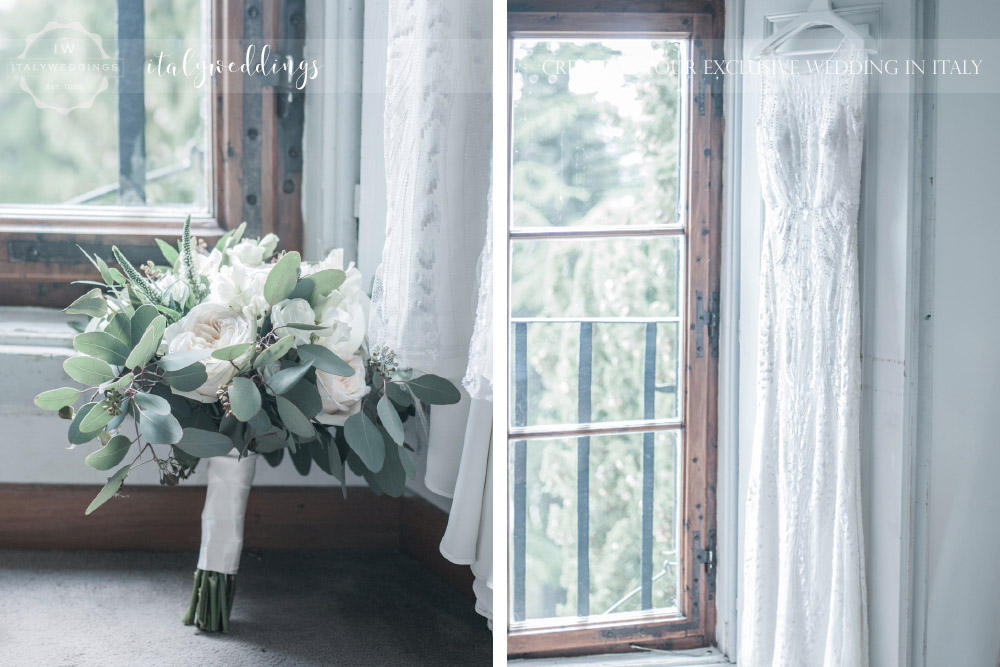 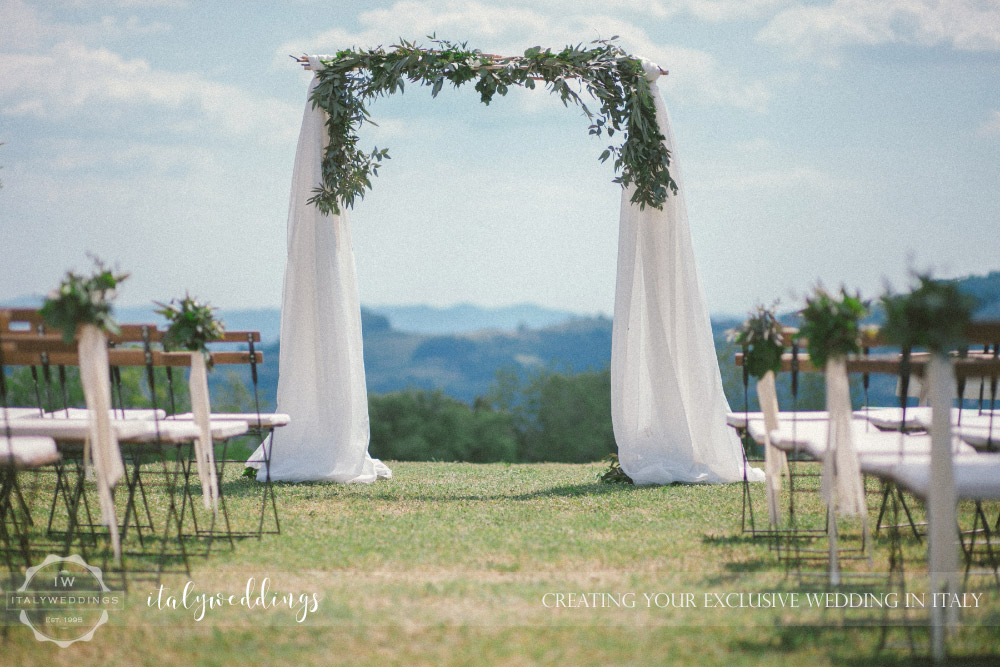 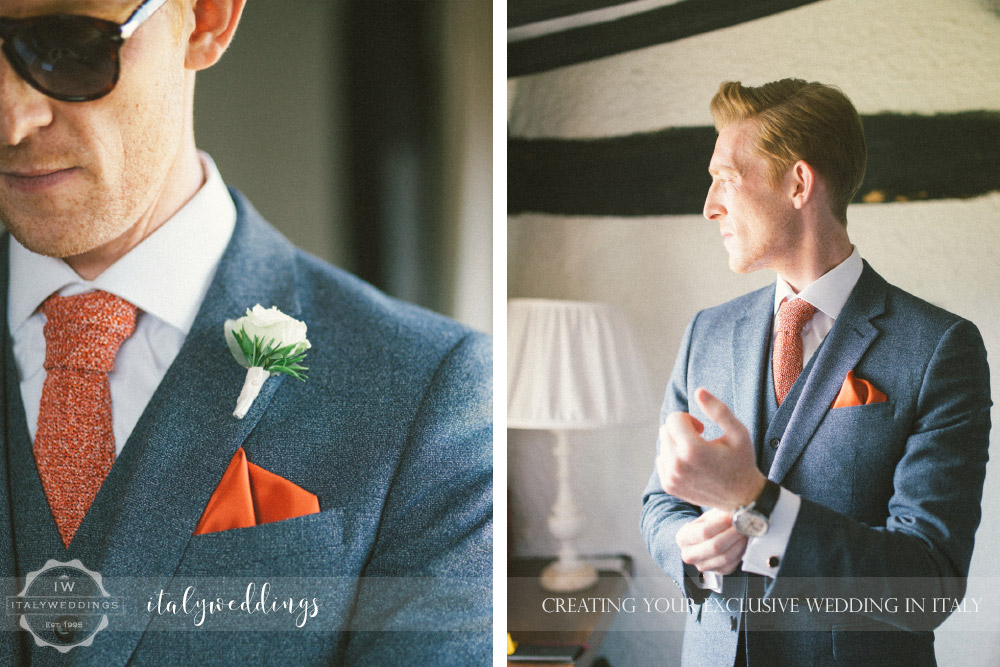 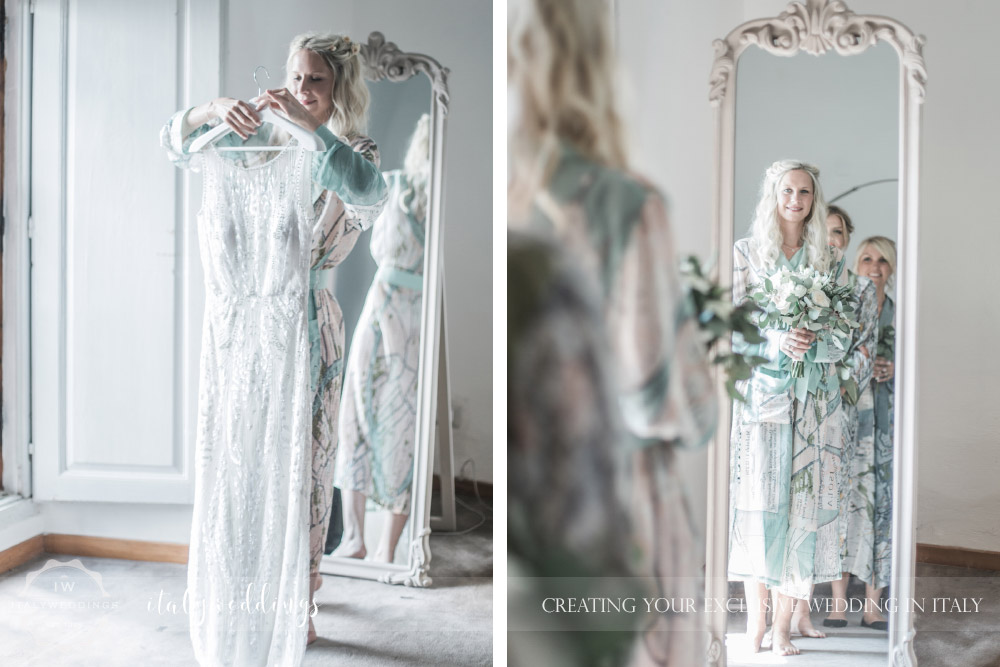 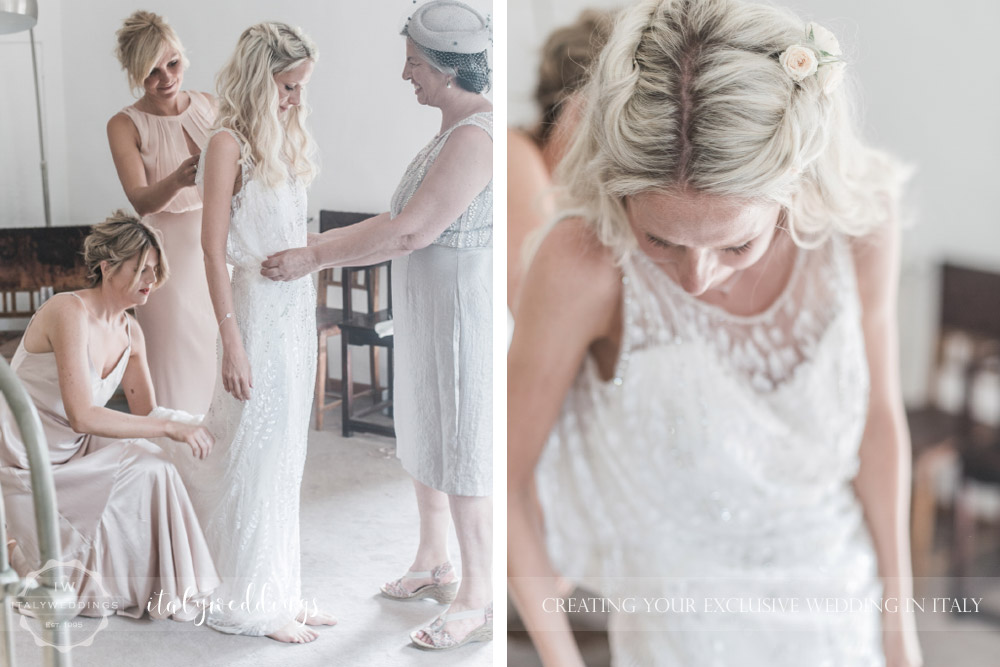 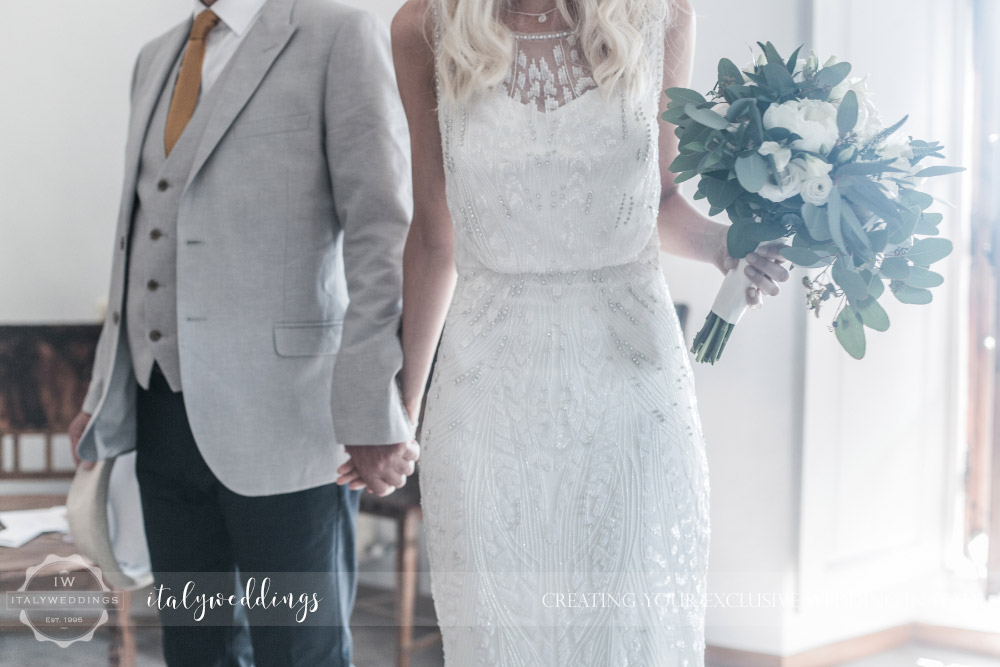 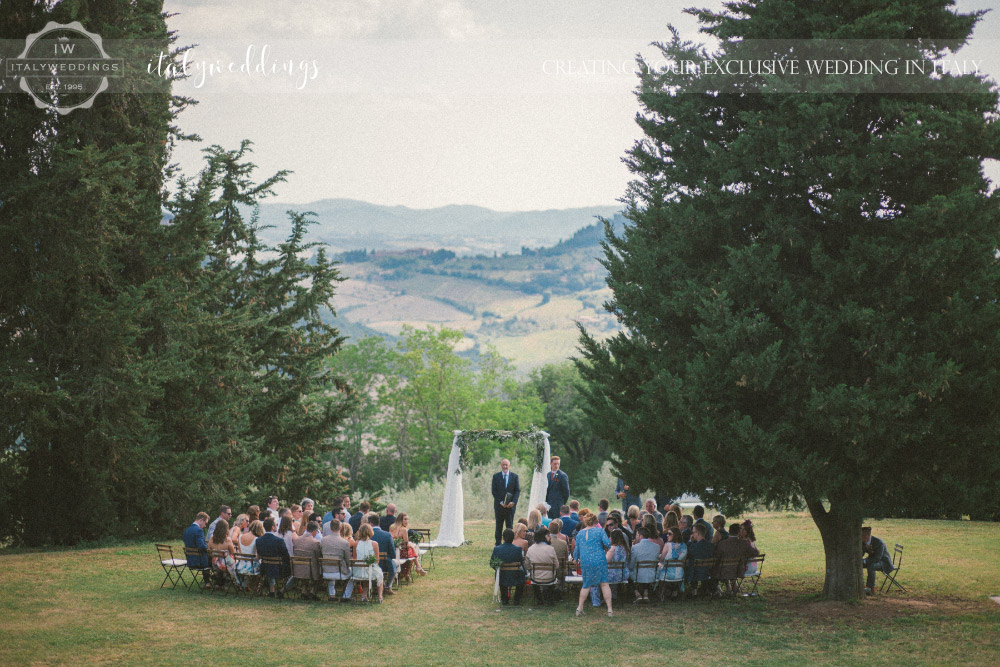 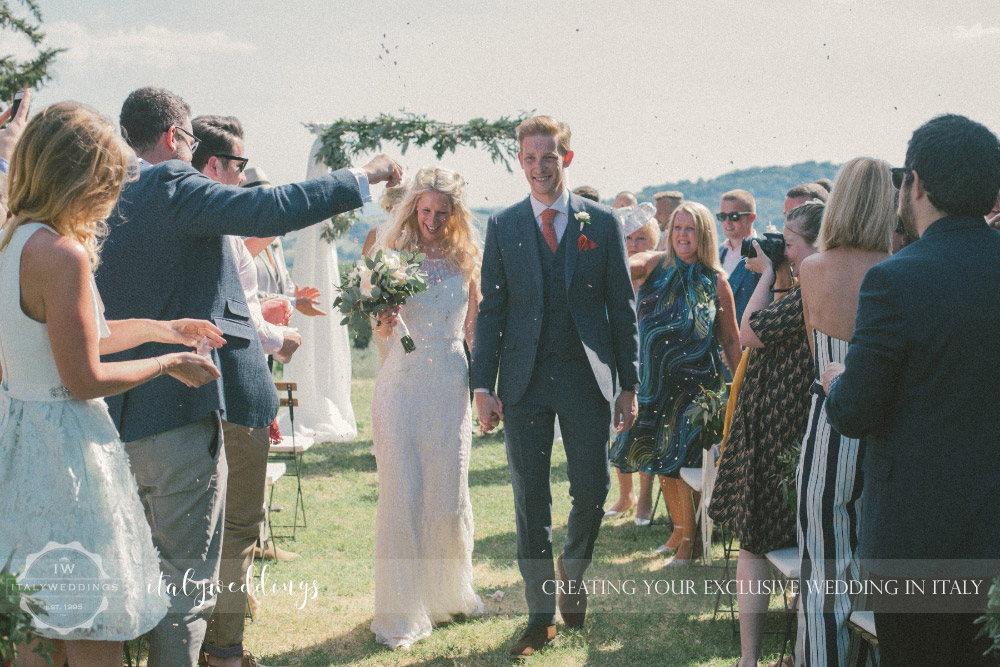 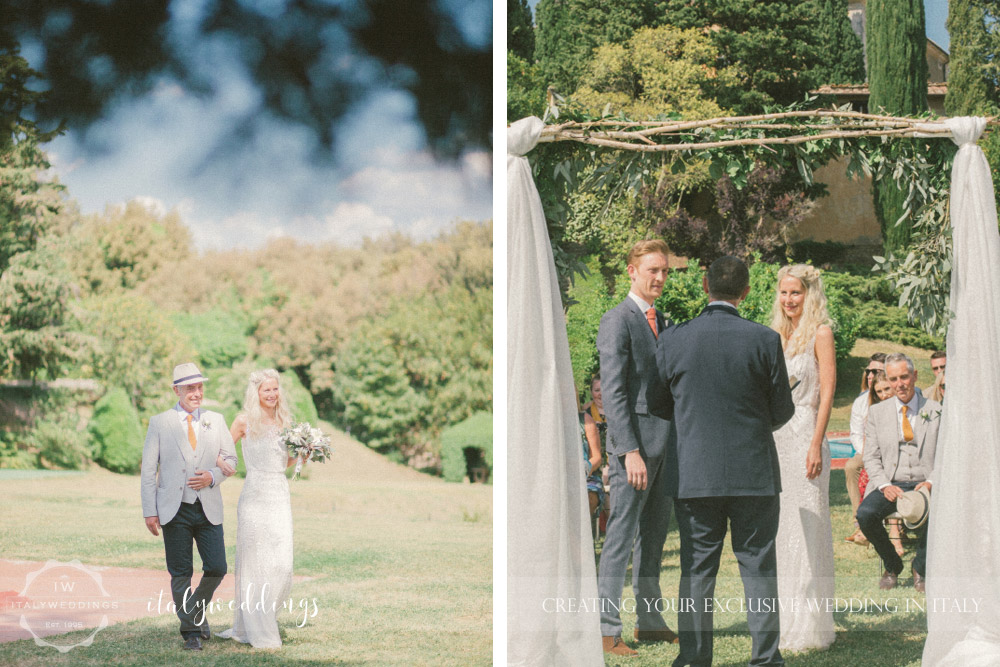 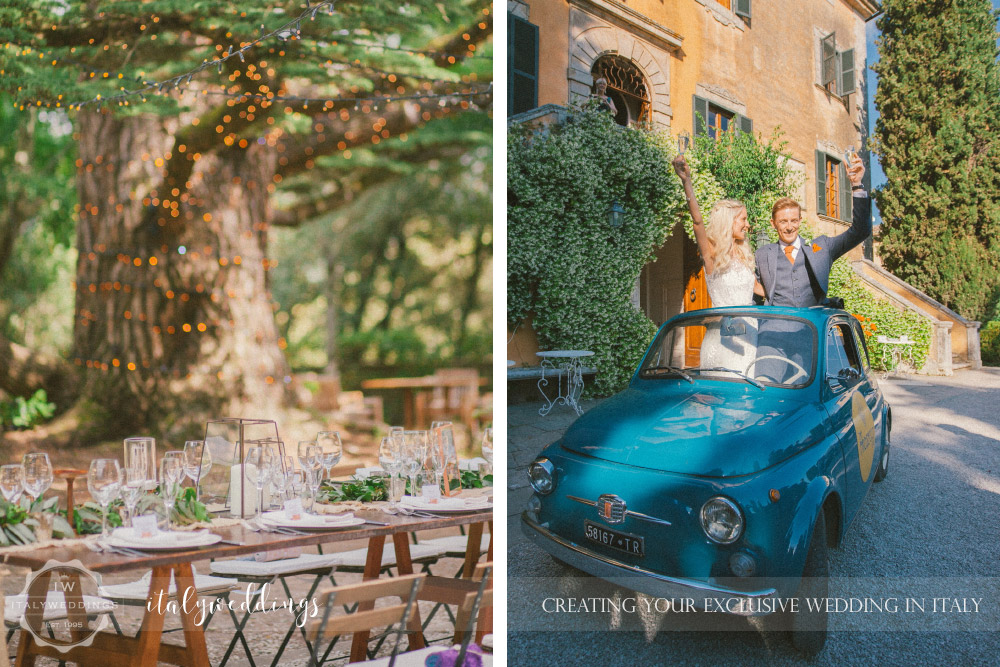 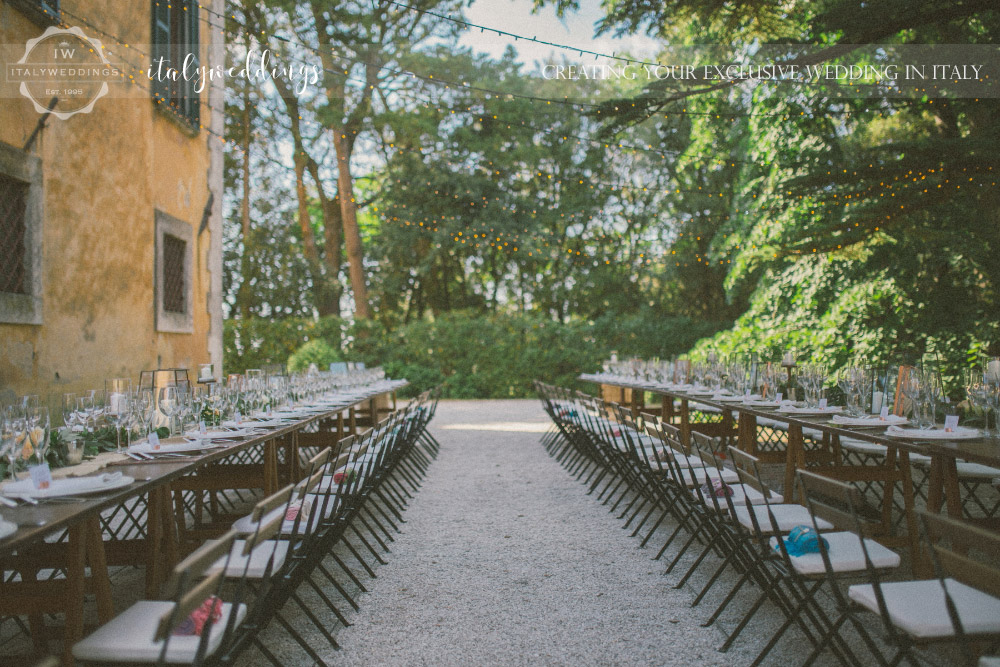 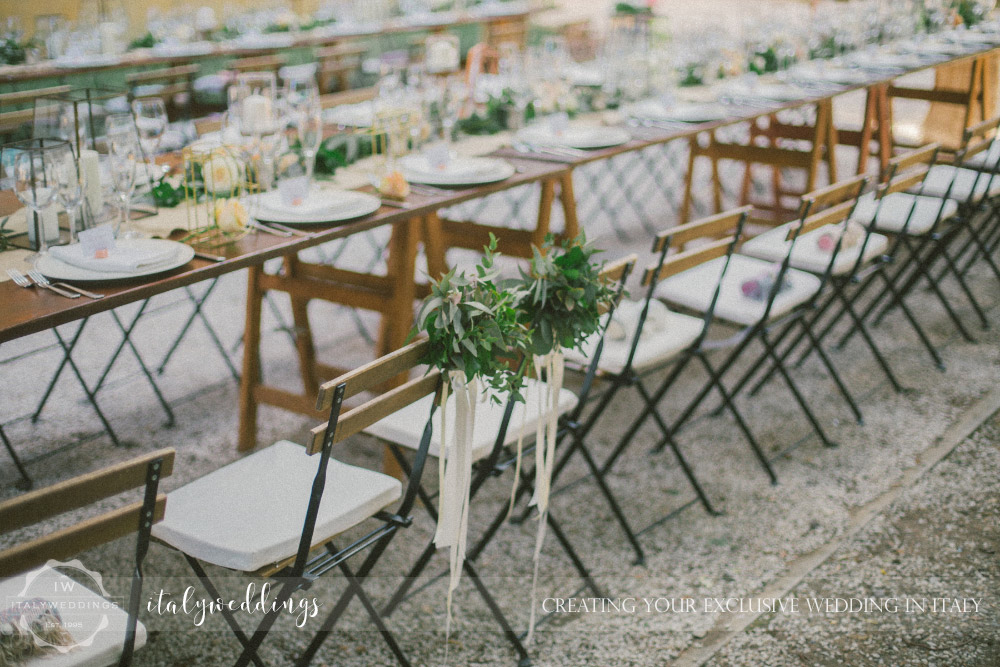 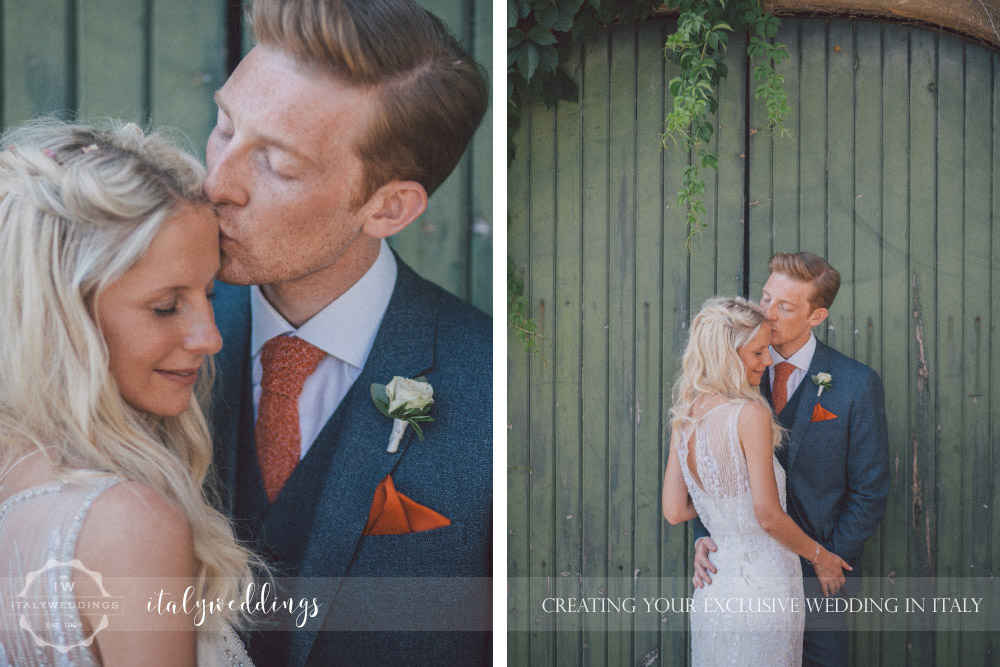 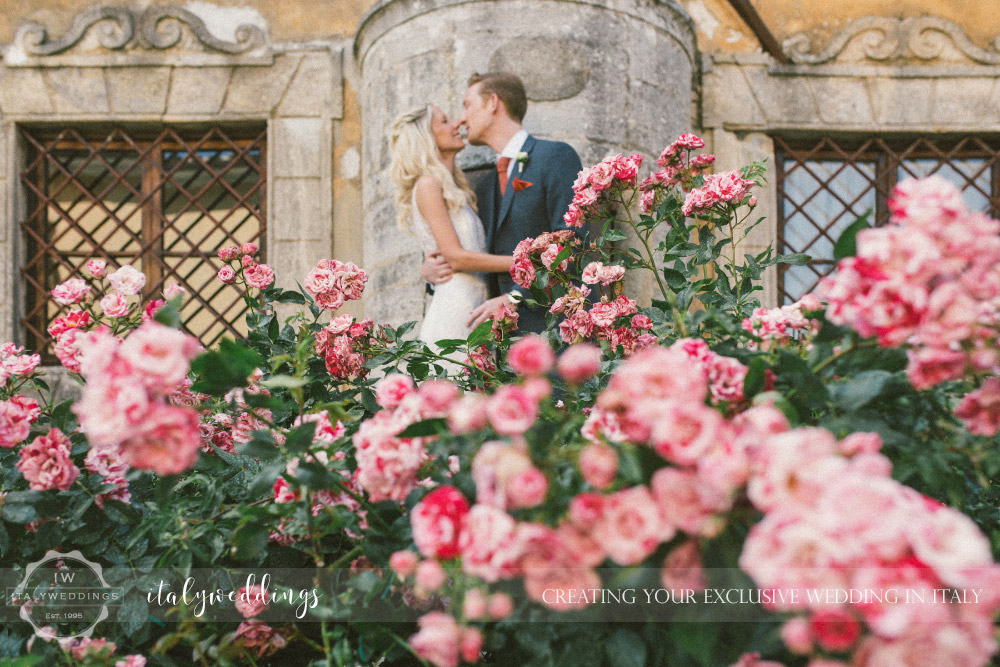 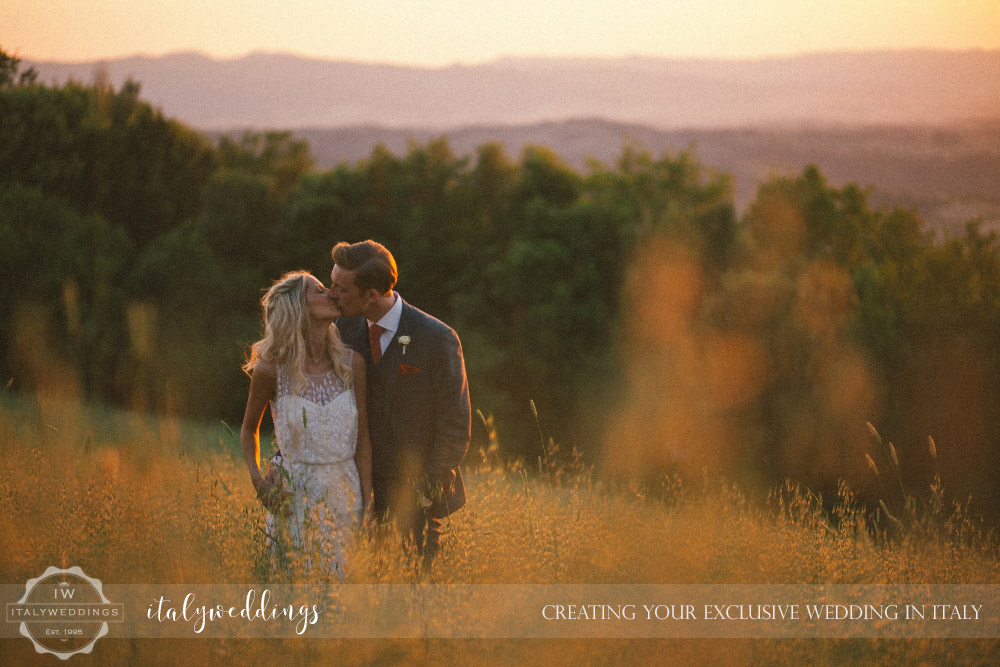 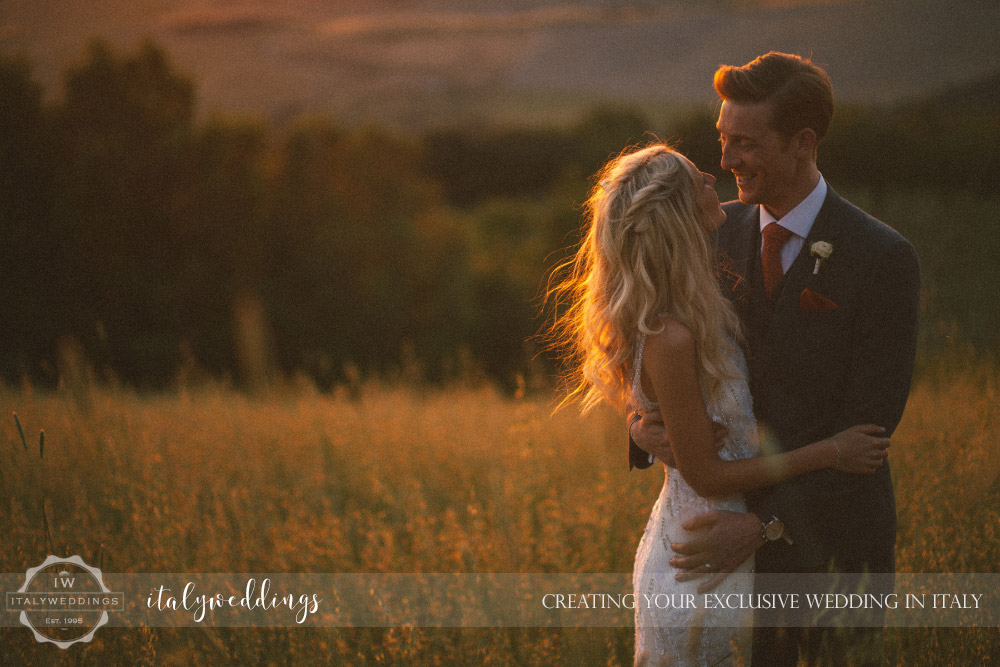 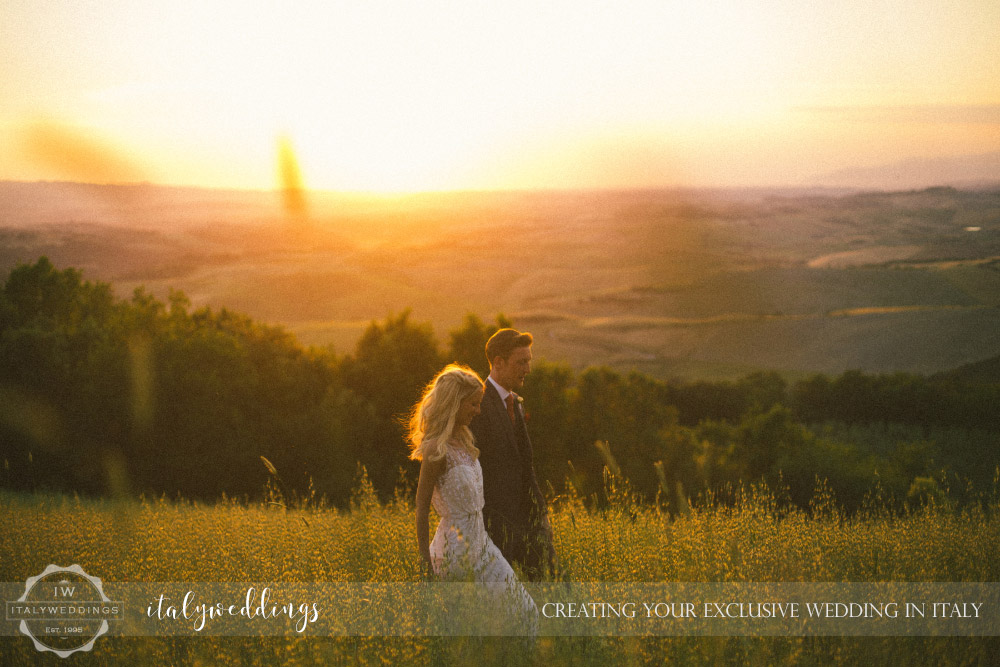 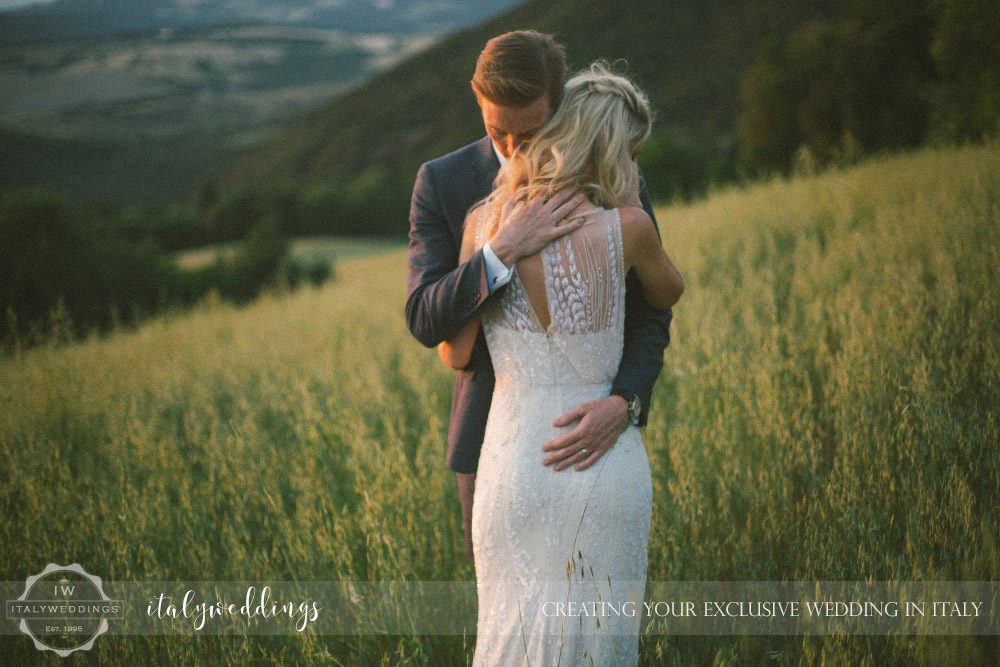 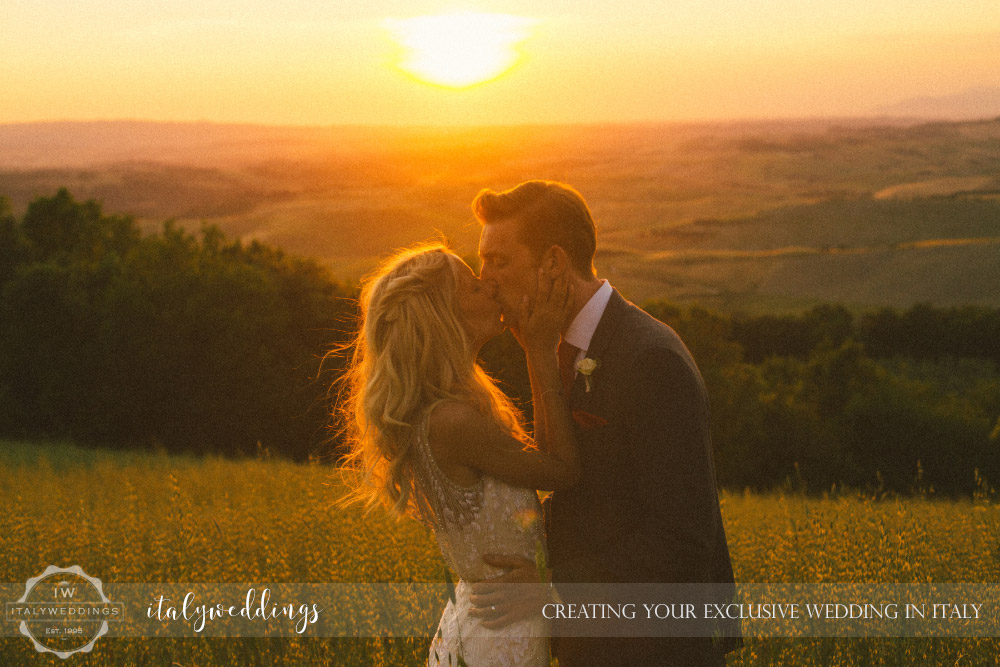 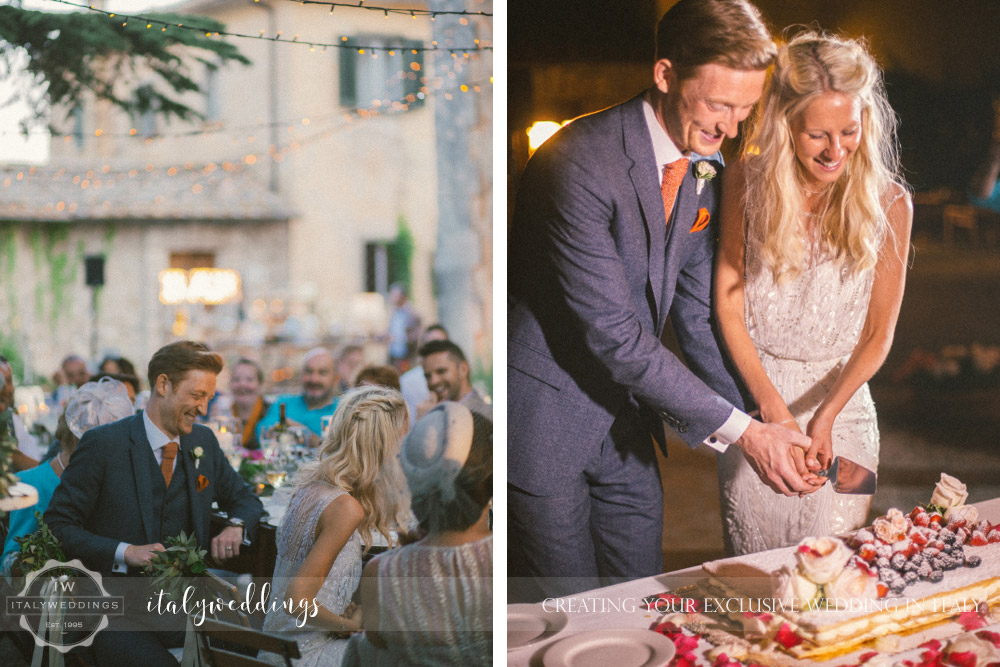 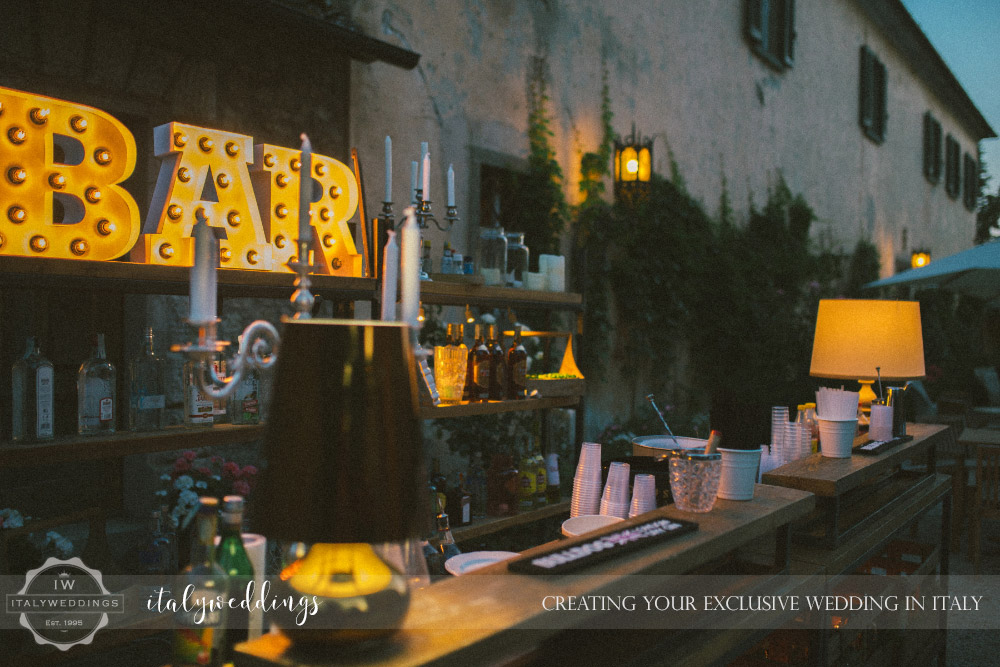 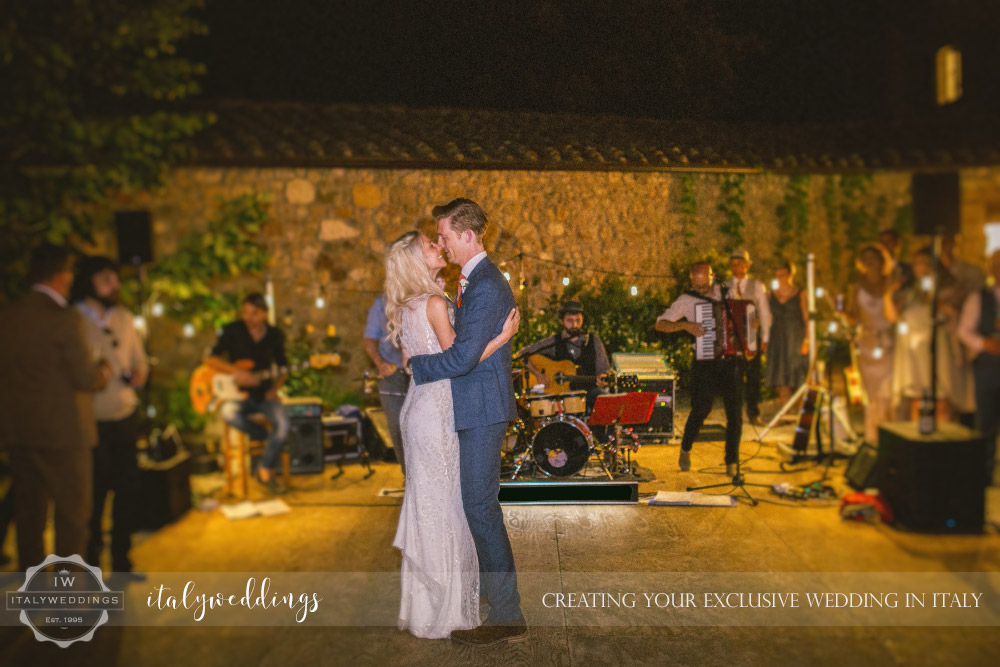 Tessa and Daniel met at law school in Manchester, England and spent their first summer together inter-railing around Italy. They quickly fell in love with each other – and with Tuscany. And so, 10 years later, it made perfect sense for them to get married in a beautiful, secluded villa, surrounded by the rolling Tuscan hills.

The couple started the celebrations with an intimate civil ceremony in the courtyard of San Gimignano town hall. Then, once the legal bit was done, a four day celebration followed. They chose the villa because it had something different – as well as being utterly beautiful and truly Tuscan, it had soul.

And so did their wedding. The couple aimed for a bohemian, “shabby chic” wedding, with a dash of elegance. The colour palette was made up of golds and coppers, to reflect the warm glow of a Tuscan sunset. The symbolic ceremony was held in the villa’s beautiful gardens and started with the stunning bride, Tessa, descending a stone staircase in Jenny Packham’s “Hermia” dress, to Jasmine Tompson’s version of Hozier’s “Cherry Wine”. There wasn’t a dry eye in the house as the couple exchanged their own vows and listened to the beautiful and intimate words of Tessa’s mother, Anna, and Danny’s Aunty, Angela.

The party then kicked off with prosecco being served out of a vintage Fiat 500 in the courtyard outside the villa – the soon to be famous Prosecco Car. While the photographer took the couple for romantic shots in the cornfields, their 75 guests chatted, laughed and listened to the couple’s carefully selected acoustic playlist, full of summer anthems which make them feel nostalgic, happy and upbeat.

The party continued with a traditional Tuscan meal, under the warm glow of the canopy lights, strung between the villa and the age-old tree, which was decorated from top to bottom in fairy lights. The guests laughed and cried to speeches delivered by Tessa’s father, David, the Groom and Daniel’s best man, Jim.

After the couple together cut the traditional Tuscan millefoglie cake, which was constructed in front of them, they took to the dance floor to an amazing live set – their first dance was to an original folk version of UB40’s “(I can’t help) falling in love with you” and the band delivered their own version of Oasis’ “Don’t look back in anger”, much to the Manchester crowd’s delight.

This was such a special wedding, which will be remembered forever by those who were lucky enough to be present for what was, undoubtedly, the best day of this couple’s lives.

Just a note from me to say the biggest thank you. It feels like many moons ago that we had that very first Skype call and you said “I hope you’re going to say the villa I want you to say…is it Francesca?” “YES – please tell us it’s free!!” And it all went from there.

Can I also say that it was lovely to have Marisa and Francesca with us at the top of those steps. We were all a bit of a mess at that point but Marisa stepped up and told us when to start the great descent and Francesca pointed out that I had a massive tear about to drip off the end of my nose. Brilliant.